Challenger Deep & the democratization of science

“It never occurred to me that my early life was anything but normal. I was aware that not everyone had a father and an uncle who disappeared into the sky in balloons. This is something the Piccards did, though. Some people were wine merchants, some shopkeepers, and others local officials. The Piccards made experiments.”

More than six decades ago today, on the 23rd January 1960, a world record was set and deep-sea research made a giant leap forward. Swiss engineer Jacques Piccard and US Navy Lieutenant Don Walsh descended to the deepest known point of the ocean — almost 11,000m below the surface at the bottom of the Challenger Deep. From that moment on, all the ocean became available for humans to explore with their own eyes.

It was no small engineering feat, designing a vessel that could safely transport people into such extreme conditions. Airtight, waterproof, able to withstand more than 1,000x more pressure than at sea level, resistant to freezing temperatures, capable of sinking at a controlled speed even as water densities change with temperature and capable of rising back to the surface even in the case of systems failure. Want to take a stab at designing a vessel like that?

Auguste Piccard did. A Swiss physicist, inventor and world-record-breaking aeronaut, Auguste adapted the metal balloon he’d made in 1931 for manned stratospheric flight to make it suitable for ocean exploration. The main features of his extraordinary invention were:

And it worked. Or, its second generation worked. Auguste Piccard’s second bathyscaph, Trieste, piloted by his son Jacques, successfully completed 64 deep-water dives before its famous Challenger Deep dive in 1960.

“In ultra-deep manned submergence, the Piccards were competing against the French Navy…It was refreshing to see a man alone with the “effrontery” to own and operate a submarine. This was the business of navies. Everyone knows that submarines should be built by governmental alphabet agencies, technical task groups, contractors, and subcontractors. Technical breakthroughs are not supposed to happen outside of well-financed laboratories, manned with electric brains and bright technicians wearing several “hats,” grinding out memoranda replete with words like cognisance, activate, and finalise. Modern technology is supposedly too sophisticated for back-yard Edisons.”

It’s funny, or perhaps sad, that few journalists of the day felt they could report on this incredible achievement alone. Successfully designing, manufacturing and using one man’s invention to reach places in the ocean never before seen with human eyes? Apparently this wasn’t enough for a ‘story’. Nor was the vast potential this invention provided to science. As Jacques Piccard described in his and Robert S. Dietz’s book, Seven Miles Down:

“…newspapers blithely fabricated yarns tailored to satisfy their avid readers. The Trieste was depicted as some sort of crackpot machine designed solely for death-brushing adventures. Needless to say, the standard sea-monster and giant-octopus stories were dusted off and printed anew. One enterprising journalist, with a flair for originality, fabricated a harrowing encounter with a monstrous sea urchin endowed with ten-foot spines and eyes as big as saucers.”

The fact is, science is rarely sensationalist. At its finest, science is a gradual accumulation of knowledge — across time, space and peoples. It is the world’s greatest collective. And it is because of this that the democratization of science is so important: the more people have access to tools and knowledge to further science, the greater this collective becomes.

At MARE-Madeira, a core tenant of our mission is to design and create low-cost technologies for marine science. We recognise the barriers that money poses to marine research institutes around the world — we’ve come up against them ourselves. But if such barriers sometimes seem impossible to overcome, then we would do well to remember the barriers of putting humans on the bottom of the ocean. As we salute the anniversary of the Trieste’s record-breaking dive into the Challenger Deep, we also salute those scientists, engineers, inventors and tinkerers who, like Auguste Piccard, demonstrated the power of wit, creativity and perseverance above that of institutionalization and commercialization. When we celebrate their incredible creations and discoveries, we should also celebrate their and their funders’ contributions to the democratization of science.

Further reading: Seven Miles Down: The Story of the Bathyscaph Trieste by Jacques Piccard and Robert S. Dietz (1961) 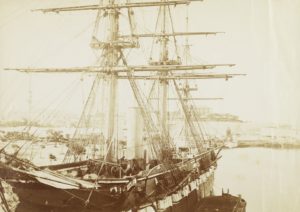